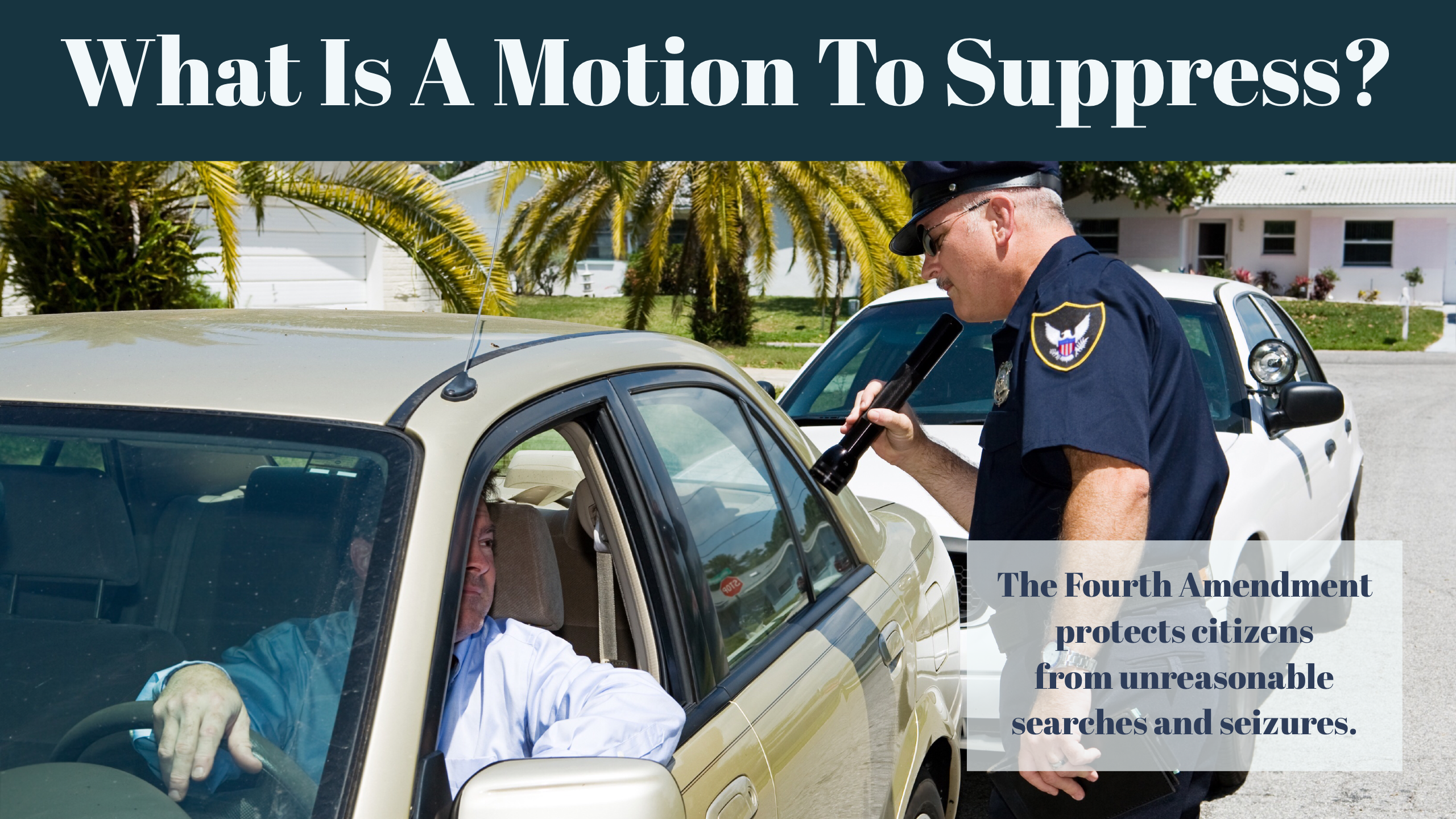 A motion to suppress is an important arrow in the quiver of any criminal defense attorney.  It is a weapon to defend the true meaning of the Fourth Amendment to the Constitution of the United States.  It is a powerful tool that protects all Americans from unreasonable searches and seizures by law enforcement officers.  Anytime a law enforcement officer detains you, searches you or your property, or seizes you or your property, there is a question whether that detention, search and/or seizure was lawful and reasonable.  Your criminal lawyer would file a motion to suppress and the burden would be on the State to prove the police action was lawful and reasonable.

The right of the people to be secure in their persons, houses, papers, and effects, against unreasonable searches and seizures, shall not be violated, and no warrants shall issue, but upon probable cause, supported by oath or affirmation, and particularly describing the place to be searched, and the persons or things to be seized.

What is a Motion to Suppress?

A Motion to Suppress is a written request to the judge asking him or her to throw out evidence that the government plans to use against you.  There are several types of motions to suppress, but, for the purposes of this article, we’ll focus on Fourth Amendment based motions alleging that law enforcement subjected you to an unreasonable search or seizure.  Your criminal attorney would draft a motion alleging that the police officer acted unreasonably and counter to binding case law.  If the police officer detained, searched and seized you or your property without a warrant, the State will have the burden to prove that the police actions were lawful?

What is an example of when a Motion to Suppress might be successful?

Take the case of Tedd Popple.  Mr. Popple was sitting in his car, which was legally parked minding his own business.  A police officer decided that this was a little weird because there wasn’t much in the area.  The officer walked up behind Mr. Popple’s car and noticed “furtive” movements, whatever that means.  The officer then asked Mr. Popple to get out of his vehicle.  When Mr. Popple did as the officer asked and opened the door, the officer saw a crack pipe on the floorboard.  Mr. Popple was charged with possession of cocaine and drug paraphernalia.

What police actions would lead to suppression of evidence?

The Florida Supreme Court, in State v. Popple, explained that there are three levels of police-citizen encounters: consensual encounters where an officer needs no reasonable suspicion to encounter a citizen, investigatory stops that require that the officer have reasonable suspicion to detain a citizen, and arrest which requires probable cause.  So, if a police officer approaches you on the street and says, “Hi, how are you doing?  Do you mind if I search your pockets?,” and you say yes, this will probably be considered by a judge to be a consensual encounter and the officer didn’t need a reasonable suspicion that you were up to no good.  However, if that same officer walks up to you and says, “Take your hands out of you pockets,” and then he starts searching you without your consent, the officer would need reasonable suspicion or even probable cause or any evidence that the officer finds would not be admissible against you.  Of course, it would be up to a judge, based on the facts and the case law, to decide whether the police officer’s actions were reasonable under the law.

What happens if the judge grants the Motion to Suppress?

If the judge grants the motion to suppress, the evidence would be thrown out.  That means that the prosecutor would not be able to use that evidence against you at trial.  A successful motion to suppress can dramatically change the strength and weakness of the case.  It could lead to the state having to drop the charges against you because they no longer have any evidence to proceed.  For example, in Tedd Popple’s case, the State could not use the cocaine and pipe against Mr. Popple, therefore they had no evidence that he was in possession of cocaine of contraband, either the State would have to drop the charges, or the judge would dismiss the case.

What if the judge denies the motion to suppress?