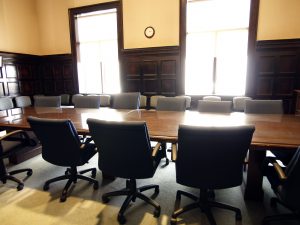 Most people have heard through school, interaction with the judicial system, television shows or otherwise that there is a constitutional right to  jury trial for people charged with a crime.  This is usually true, but it is not true in every case.  There is an exception for certain minor crimes where a defendant does not have a right to a jury trial and the judge decides whether or not the defendant is guilty of the crime.  That exception involves crimes where the defendant cannot be sentenced to jail or prison for more than six months.  In other words, if a defendant is charged with a minor crime and the maximum penalty is six months or less in jail, the defendant is not entitled to a jury trial.  The parties might agree to a jury trial or the judge might insist on a jury trial, but the law does not give the defendant a right to a jury trial if he/she wants one and the judge will not allow it.  Of course, this would only apply to minor misdemeanors, and it would never apply to felonies.  However, some people can be seriously impacted by any criminal conviction no matter how minor the charge or by any time in jail and may want a jury trial to protect his/her rights.

For instance, there was a case just south of Jacksonville, Duval County, Florida where a defendant was charged with possession of less than an ounce of marijuana.  This is a misdemeanor crime, but as ridiculous as it may seem, it carries a potential penalty of a year in jail.  The defendant wanted a jury trial, but the judge denied the request because he said he had no intention of sentencing the defendant to jail time if he was convicted of the crime.  The defendant had his trial with the judge as the decision maker (referred to as a bench trial), the judge found him guilty and the judge sentenced him to no time in jail.

The criminal defense attorney appealed the conviction because the defendant was denied his Sixth Amendment right to a trial by jury.  The criminal defense lawyer won the appeal because the law allows any defendant to have a jury trial if he/she is charged with a crime that allows for a sentence of more than six months in jail even if the judge promises that the defendant will serve less time, or no time, in jail if he/she loses.  Therefore, the defendant was entitled to a new trial in front of a jury.  However, it has to be mentioned that forcing the taxpayers to pay for one trial involving a small amount of the cannabis plant is a complete waste of time.  If the state has to pay for two such trials in this case, some people should be forced to find a different line of work that does not involve taxpayer money.