Can you walk into a federally licensed firearm dealer’s shop and purchase a firearm for someone else?  In other words, can your uncle Joe, who lawfully owns other firearms, give you $900 to go into the local gun shop to buy him a new semi-automatic?  The United States Supreme Court has said, “No.”  This sale, commonly referred to as a “straw purchase,” is illegal under federal law.  Even though both you and your Uncle Joe can lawfully purchase firearms, it is a crime to do that if you are the actual buyer on Form 4473, if you are actually purchasing the firearm for a third party. 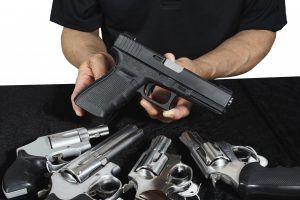 In 2009, Bruce Abramski, a former police officer, walked into a local gun shop and purchased a firearm for his uncle. His uncle sent him $400 to make the purchase. Under federal law, the firearm dealer was required to record the buyer’s name, age and place of residence. Abramski filled out ATF Form 4473 stating that he was the actual purchaser. Abramski walked out and immediately transferred the firearm to his uncle. Both Abramski and his uncle were eligible to lawfully purchase a firearm from a federally licensed firearm dealer.  Neither one was a convicted felon or otherwise a prohibited person.

So, why wasn’t what Bruce Abramski did legal under the Second Amendment?

The United States Supreme Court in a close 5-4 decision held that it is illegal for one lawful gun owner to purchase a gun from a federally licensed gun dealer for another lawful gun owner.  The theory of the Court was that the true owner is not the purchaser, but the end recipient.  And because Federal law requires the gun shop owner to accurately record the “owner” of the firearm, Abramski caused the gunshop to engage in a crime (i.e. falsely recording the name of the owner).

Confused yet? Join the club. The Supreme Court has created a rule of law that lends itself to mass confusion and arbitrary enforcement by the Government. The Gun Control Act enacted by congress focuses on legislating federally licensed gun dealers, not purchasers or secondary market sales. Yet, the Abramski decision widens the net of 21 U.S.C. §922 to include criminalizing the conduct of otherwise lawful gun owners.

You can read the entire Abramski Supreme Court decision here.