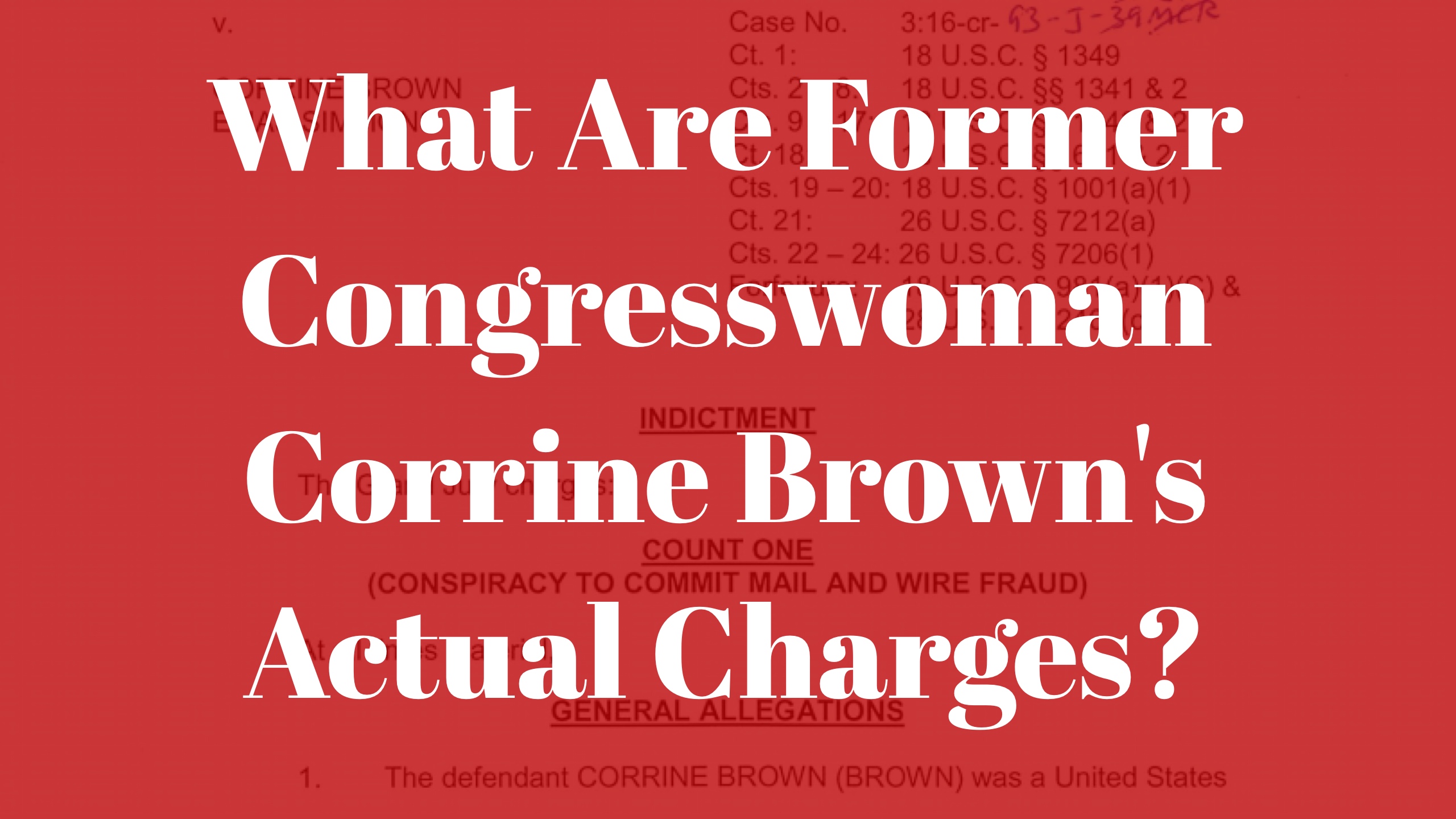 On July 6th, 2016, Corrine Brown, along with Elias Simmons, was indicted on a twenty four (24) count federal indictment.  You heard me right, folks.  24 counts.  The charges all stem from her relationship with a organization called the One Door for Education – Amy Anderson Scholarship Fund.  The basic allegations are that Corrine Brown, when she was a congresswoman, would solicit contributions to this fund.  The proceeds from the contributions were supposed to go to scholarships.   The government has alleged that the vast majority of the money taken into this scholarship fund went into the pockets of Corrine Brown, Elias Simmons and others.  Specifically, the federal government has alleged that out of approximately $800,000 contributed to the fund, only about $10,000 went to actual scholarships.  So let’s break this down and look at the various charges.

The Government alleges that Corrine Brown and others solicited money into the One Door for Education Scholarship Fund and then deposited some of those proceeds into their personal accounts for personal use.

Count I is a favorite of the federal government. It is the all inclusive, ominous “Conspiracy” charge.  Corrine Brown is charged with conspiracy to commit mail fraud and wire fraud.  Basically, conspiracy is the agreement between at least two people to commit a crime.  It doesn’t even have to be a explicit agreement.  It can be implicit.  In other words, if two people agree to sell cocaine, they don’t have to specifically say that they are going to sell the cocaine.  They don’t have to work out all of the details.  They don’t have to say anything at all.  The conspiracy can be proven by their actions and the surrounding circumstances.  The government simply must prove that two or more people agreed in some way to commit the crime and that the Defendant knew the unlawful purpose of the plan and joined in it.  So, if the government proves that Corrine Brown knew that One Door for Education was taking in contributions by telling people that the money was going to scholarships, but she agreed, either implicitly or explicitly, to allow someone to put that money in her bank account for her own personal use, the jury would find her guilty of this conspiracy charge. Even if the money never made it to her bank account.  It is the agreement that is the conspiracy, not the actions.  But for practical purposes, the government usually charges people with conspiracy, as well as the underlying charge, when the underlying charge has been completed.  This is the case in Corrine Brown’s prosecution.  She is alleged to have conspired to commit mail and wire fraud, and she is charged with actually committing mail and wire fraud.

Count 2 through 17 relate to the actions, as opposed to the agreement (as charged in Count 1) of Corrine Brown using the mail system or wire system to transport payments to and from One Door for Education.   Each count from 2 – 8 relates to mail fraud, each charging a separate transaction where a donor mailed a check to  to different individuals and the checks were made out to One Door for Education, or One Door for Education mailed a check to different individuals.  To sum up their argument that Corrine Brown committed mail fraud, the government is claiming that she knew that other people were mailing checks to One Door for Education under the belief that the money was going to scholarships when in fact she received some of that money for her own personal use.  Below are the elements that the government must prove:

Mail Fraud – The Government must prove:

(1) the Defendant knowingly devised or
participated in a scheme to defraud
someone, or obtain money or property,
using false or fraudulent pretenses,
representations, or promises;

(2) the false or fraudulent pretenses,
representations, or promises were about a
material fact;

(3) the Defendant intended to defraud
someone; and

(4) the Defendant used [the United States
Postal Service by mailing or by causing to
be mailed] [a private or commercial
interstate carrier by depositing or causing
to be deposited with the carrier] something
meant to help carry out the scheme to
defraud.

Each count from 9 – 17 charges a separate wire communication or transaction involving emails soliciting donations or wire transfers of proceeds from One Door For Education into various individual’s bank accounts.  The government has alleged that those individuals then in turn deposited money into Corrine Brown’s bank account with money that was the proceeds of the One Door for Education donations.  To sum up their argument, the government is claiming that Corrine Brown knew that other people were soliciting money for the One Door for Education Scholarship Fund and that she knew that people were depositing proceeds from those donations into her bank account for her personal use.  Below are the elements the government must prove:

Wire Fraud – The Government must prove:

(1) the Defendant knowingly devised or
participated in a scheme to defraud, or to
obtain money or property by using false
pretenses, representations, or promises;

(2) the false pretenses, representations, or
promises were about a material fact;

(3) the Defendant acted with the intent to
defraud; and

(4) the Defendant transmitted or caused to be
transmitted by [wire] [radio] [television]
some communication in interstate
commerce.

Count 20 relates to Elias Simmons only.

In Count 19, Corrine Brown is charged with knowingly concealing the alleged fraud relating to the One Door for Education Scholarship Fund by failing to report on her financial disclosure form required of all congressmen and congresswomen the money she received from One Door for Education as income.  Members of Congress must fill out and file a financial disclosure form outlining their financial transactions and it is a crime to falsify or conceal financial information when filing that form.

Count 20 relates to Elias Simmons only.

Count 21 is a distinct and separate crime from Count 19.  Count 19 related to filing a financial disclosure form as a representative of government.  Count 21 relates to impeding the administration of the internal revenue laws, or tax obstruction.  Basically, the government has accused Corrine Brown of failing to include the money she received from One Door for Education on her taxes.  The government also alleges that Corrine Brown claimed deductions for charitable donations that she didn’t actually make. 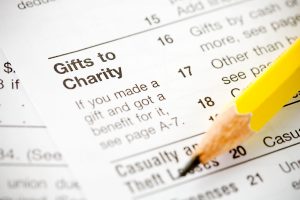 Corrine Brown is accused of filing false tax returns. Specifically, she is accused of failing to report the money she received from One Door for Education and for claiming charitable contributions that were not made.

Corrine Brown’s case highlights the fact that there are many statutes that can be applied to one set of actions. For example, if Ms. Brown was alleged to have only solicited one check into the One Door for Education Scholarship Fund under false pretenses which was mailed after an email solicitation and if she failed to disclose her proceeds from that one check, the government would have charged her with Conspiracy, Mail Fraud, Wire Fraud, Scheme to Conceal Material Facts and Filing False Tax Return.  You may think that this is double jeopardy, but it isn’t.  Each count relates to a different act as explained above.  Each crime has a different element.