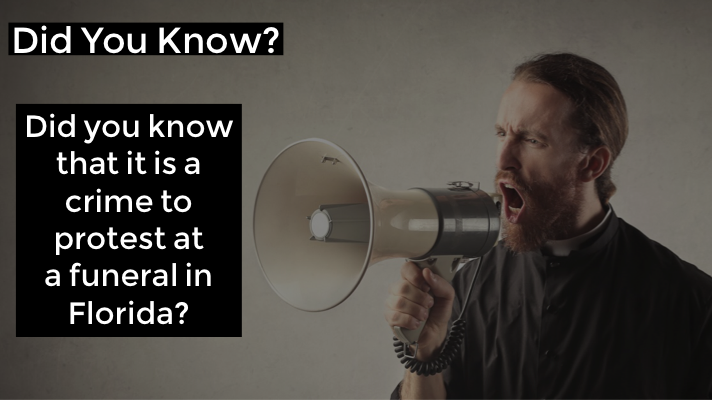 We’ve all seen the news footage of religious protests at the funerals of deceased service members.  People yelling and screaming and carrying signs with hateful messages.  These are images that get most rational people’s blood boiling.  But did you know that in the State of Florida, it is actually a crime?

Is it a crime to protest at a funeral?

What kinds of places are covered by this statute?

The statute is very broad regarding where the funeral takes place.  The following locations are specifically listed:

within 500 feet of the property line of:

What is considered a “protest?”

“Protest activities” are defined under the statute as “any action, including picketing, which is undertaken with the intent to interrupt or disturb a funeral or burial.  This definition can be problematic.  What if family members blame each other for the death and have a heated exchange at the funeral?  Is yelling at another family member during the funeral an action which is undertaken with the intent to interrupt the funeral?  What a police officer thinks it is?  What if a prosecutor thinks it is?  This is a legal issue that may have to be fleshed out in court.  Hopefully, law enforcement stay true to the intent behind the law and apply it to those who would picket with the definite intent to cause a disturbance to promote their own religious ideas.

But wait?  What about the First Amendment?

When it comes to protesting, many people drape the First Amendment over them as if it were an impenetrable cloak of unlimited protection.  But the First Amendment does not allow a person to say anything they want to anyone they want anywhere they want anytime they want.  It is well established that it is a crime to yell “fire” in a crowded movie theater.  It is a crime to use words to threaten people.  You do not have the right to go onto someone’s personal property and say anything you want without that person excluding you from their property.  There are many limitations on freedom of speech.  The ultimate decision maker on whether speech is protected by the First Amendment is the United States Supreme Court.  So, what about this statute?  Does it pass constitutional muster?

Florida’s law banning protesting at funerals hit the books in 2013.  It was passed as a direct result of religious protests at the funerals of fallen soldiers.  Other states are passing similar laws.  One thing the Florida legislators did that provided some protection when the statute is inevitably reviewed by appellate courts is that they did not focus on specific group.  In other words, they applied to law to all groups protesting for any reason.  They also did not prohibit protesting outright.  They simply created a 500 foot buffer for the grieving family during a very specific time frame of one hour before the funeral through the funeral process and through one hour after the funeral.  Therefore, people can still protest.  They just have to move back 500 feet one hour before the funeral and stay there until one hour after the funeral.  Because the law tightly crafts the distance and timing in a way that reasonably comports with protecting funeral goers who are arriving at the funeral, attending, and leaving the funeral, while still allowing the protesters to invoke their First Amendment rights, this law will likely hold up to appellate review.

What are the possible penalties for protesting at a funeral?